Born in 1969, Cluj, Transylvania, Cristina Popovici has been painting from an early age in an expressionist manner. She studied classic art and practice, in accordance with Europ 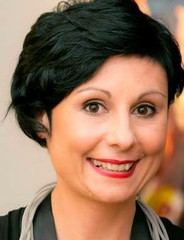 ean artistic traditional classes. She graduated in 1995 with a Bachelor of Fine Arts Painting, from Academy of Visual arts, Cluj, Romania after six years of studying.

She started to exhibit regularly from 1989 in either solo or group exhibitions. Between 1994 and 1997 she travelled regularly to Berlin for exhibitions where she was represented by Marianne Westerheide gallery.

In 2000 January she moved with her family to New Zealand. She lived and worked in Christchurch and later in Auckland. Throughout the nine years spent in New Zealand, her art made an impact in the local scene, and she was dubbed as one of the most daring abstract expressionists in the country. Her works are admired by a large number of followers. She gained further recognition by winning the Coca Art Award 2003 and later on as a finalist in Wallace Art Award competition.

“Popovici’s use of materials and technical skill is of the highest calibre. Building on over a decade’s training, she is constantly evolving and expanding on her impressive vocabulary of techniques. Furthermore this technical skill is compounded by an unwavering dedication. Truly “living” for and through her practice she is fully devoted to the highest artistic outcomes.”- Charles Tongue, former director SOCA gallery, Auckland, New Zealand.

Examples of Cristina’s work can be viewed at Mobile Art Gallery in Mt Eden.