Nic developed his talent for painting at a young age. He first found inspiration in the rugged landscapes of his family farms and this love of his rural surrounding grew to encompass the sights he would later experience and captured in his travels throughout New Zealand, Japan, the United Kingdom and Europe.

After completing his masters in History, Nic spent time in the United Kingdom working as a full time artist. He adapted his subject matter to the new environs around him and found these to be just as popular as his New Zealand landscapes. New Zealand artists Colin McCahon, Rita Angus, Doris Lusk, Toss Woollaston and Nigel Brown were strong influences in Nic’s art and he has taken elements of these art history greats to create his own distinct and unique style. Nic’s pieces are modern, bold, iconic and stylised and the strong colours and black outlines of his buildings, harbours, boats, cityscapes and rural landscapes have made his paintings instantly recognisable. 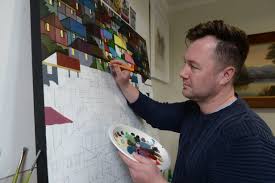