Born in Paparoa, New Zealand in 1954, Peter James Smith is a prolific artist, holding several solo exhibitions each year. He has worked in both New Zealand and Australia since the mid 1970’s as a contemporary painter and is currently based in Melbourne.  His practice is built from the traditional painting medium of oil on linen. He is widely published as a mathematician and holds the degrees BSc (Hons), MSc, PhD with a Master of Fine Art in Painting. For many years he was a Professo 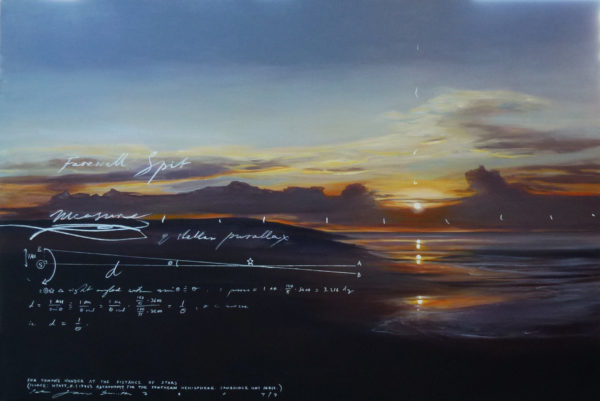 Peter’s  wide interests in science, culture and history coalesce into his distinctive landscape paintings and assemblages, scrawled with poetry, truncated notes, jottings and scientific diagrams. What is arresting about his landscapes in particular is his ability to marry his Romantic style of painting – historically a reaction against the scientific rationalization of nature – with scientific vernacular itself, to create what TJ McNamara praises as “an outstanding personal style and achievement”.

Keith Stewart elaborates, “Smith paints with an enviable fluency in two abstract languages – mathematics and art – each carefully presented to perform a specific role in his Socratic argument. Both languages strive for elegance, but we are used to seeing them apart, so he uses vernacular painting to seduce. Then through his arcane scientific medium he delivers a sudden virtuosity of spirit.

Examples of Peter’s artwork can be viewed at many galleries including Mobile Art Gallery, 23 Edwin Street, Mt Eden, Auckland.