Matt Dowman was born in Whanganui in 1973 and raised in Taumaranui.  He relocated to Auckland in 1995 to further his artistic career. He began study at Whitecliffe College of Arts and Design in 1999, graduating with a Bachelor of Fine Arts in 2002 before going on to complete his Masters in Fine Arts (with Honours) at Auckland University’s Elam School of Fine Arts in 2004.  He has had success exhibiting throughout New Zealand as well as offshore in Melbourne, Sydney, Berlin and Vienna.  His work is held in major collections home and abroad.

Matt is a prolific artist having captured the attention of the New Zealand media, he has been interviewed regularly on TV3 Nightline and various art programs, magazines, newspaper articles and featured in major publications such as Warwick Brown’s book “Seen this Century”.  Matt has also captured the attention of Auckland with his many public murals such as his work in Britomart “Bare Rocks & Backbones”. 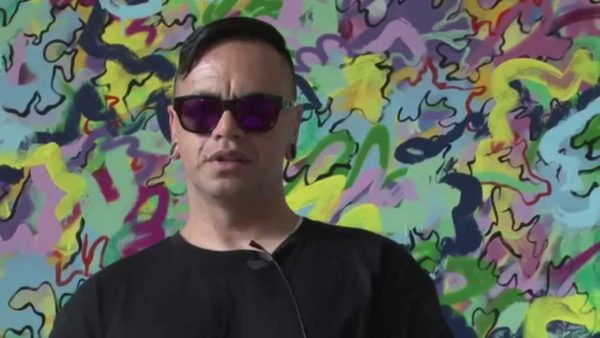 He has received numerous awards including third place in the Mazda Emerging Artist Award, runner up in the New Zealand Painting and Printmaking Award and a merit award in the Molly Morpeth Painting competition in 2011.

Matt’s work is currently dealing with the issues of surface texture, colour and repetition. The main areas of investigation have been focused on the translation of Graffiti/street art techniques, stencils, repetitive imagery, secular imagery into the painterly language of formalist abstraction.  With his Maori heritage, Matt explores a sense of identity in inner city living using colour and gesture to explore a synthesis of cultures.

Matt teaches expressive drawing in the Year One core programme and is a Fine Arts lecturer both at Whitecliffe and Auckland University of Technology.