Luise Fong was born in Sandakan, Malaysia in 1964.  In 1983 she began tertiary study by attending the Textile Design Course offered by Wellington Polytechnic, Wellington. In 1986 Fong began study at Elam School of Fine Arts, University of Auckland, Auckland and graduated with a Bachelor of Fine Arts in 1991.

Luise took regular trips to Europe and America during the late 1980s and 1990s. Between 1993 and 1994 she worked as a Junior Lecturer at Elam School of Fine Arts before relocating to Melbourne, Australia in 1994. Whilst living abroad, Luise travelled several times to both Hong Kong and New Zealand to work on her Transfusion, Fathom, 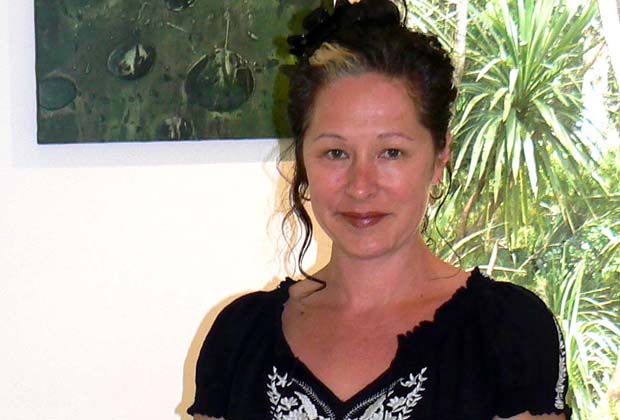 and Sonar exhibitions. In 1999, Luise returned to New Zealand. She was appointed Lecturer in Painting at Elam School of Fine Arts in 2001 and remained there until 2005.

The starting points for Luise Fong’s work are generally “intuitive responses to the world, my state of mind, and cultural aspects around me.” She has also always been inspired by the emotive and intuitive resonance of works by more representational, figurative artists such as Luise Bourgeois (1911 – 2010), Ross Bleckner (1949 – ), and Eva Hesse (1936 – 1970). Although she has worked in sculptural assemblage and the photographic medium, she is continually drawn back to the discipline of painting. Working with a range of abstract motifs and techniques, she distills her experience of the world into a personal and distinctive vocabulary of symbols. She values the physical nature of painting and believes it is of increasing importance that art and handcrafted objects have the feel of the body on them as digital technology affords the world an ever-expanding “virtual reality”.

Fong’s paintings have always made reference to the feminine, and in the late 1980s she worked repeatedly with the body as subject. Largely figurative collages evolved rapidly into symbolic, abstracted representations of the feminine, with circles and ovals as dominant shapes in layered black surfaces that glowed with the illusion of light.

In the early 1990s, she moved from figurative depiction of the female body to more abstracted and metaphorical representations of the feminine, depicting implicitly the “forensic evidence” of the traces and stains of the human body, with motifs that were suggestive of close-ups of its surface or interior. It was at this time that she began cutting or drilling holes through the surface of the painting – a reference to wounding and the process of autopsy. This also indulged her fascination with the physical and allusive qualities inherent in various treatments of two-dimensional painted surface. Executed in sombre, almost-monochromatic palette, her paintings contained a push-pull tension of opposites: light-dark, translucence-solidarity, intuition-intellect, yin-yang, and microcosmic-macrocosmic.
The exhibition Universe in 1999 showed Fong’s imagery becoming more evocative of the galaxy and planetary systems; rather than the microcosm of the human body and images reminiscent of floating cellular structures or microbes viewed through a microscope. She also introduced an element of relief to the painting surface by building it with carborundum and used a ‘gravity- controlled pour’ technique to create droplets of gesso, her visual metaphor for energy and movement.

Fong has always used colour metaphorically. An exhibition in Hong Kong in 1998 signalled a dramatic shift from her previously sombre palette to a red-dominated one, in acknowledgement of her own Chinese-Malaysian heritage and the culture of Hong Kong.

Then, after a near-fatal accident in 2001 when Fong returned to work with a sharp awareness of having been given a second chance, she again revisited the red palette for its visceral, life-affirming and celebratory qualities.

Fong’s Asian heritage, with which she has had comparatively little contact, continues to be one of rich sources of inspiration as she explores visual aspects of Asian culture. In the late 2000s, Fong began working with a new format inspired by an antique Chinese lattice window that has been in her studio for some years. This has visual links to the natural world and its patterning, to which she continues to look for inspiration.