Justin Summerton is a NZ surrealist painter depicting a dreamlike world, who often presents New Zealand as a primeval landscape. Summerton’s fascination with the sea he knows so well, volcanic cones, mountains and cloud formations are all targets which form the basis of all his work.

Justin was born in Wirral Peninsula in North West England in 1968.  When he was four years old, his family emigrated to New Zealand.  He spent his early years in Dunedin where he went to university and completed a Bachelor of Arts in 1993. 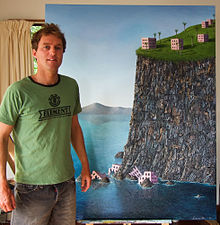 Justin feels a particular affinity with the New Zealand coastline, spending much of his time in the water as a competitive surfer. He explores the shores of many beaches throughout New Zealand in his paintings from Piha (Auckland) to St Clairs Beach (Dunedin), as well as being an avid traveller. “Most of my art is related to the ecology of the world,” Justin says. “I’m not a hippy, greenie painter who rants on, but maybe I am an environmentalist. New Zealand is a bit of an oasis like that and I’ve had that theme running through my work for a while.”

Justin Summerton uses a scrumbling brushstroke technique to build layers of colour and texture onto his surface. This approach tends to modify rather than obscure the previous layer and creates stark contrast between dark and light pigments. The overall result is a fresh and vibrant new view of the New Zealand landscape.