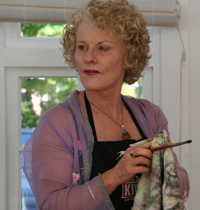 Belinda Wilson was Born in Calcutta in 1954, however her home became New Zealand in 1955 when her family settled near Timaru. Graduating from Elam in 1975 Belinda obtained a Diploma in Fine Art with Honors.  She went on to exhibit at CSA Gallery in Christchurch, Victoria University Gallery in Wellington and the Starr Gallery in Hamilton.  That same year Belinda won her first major award in the Kelliher Art competition with her ‘Pensioner’ portrait.

In order to further her painting career Belinda moved to New York in 1977 and studied abstraction with artist Nieves Billmyer, who was student to well known Expressionist painter Hans Hofman. Her travels led her to Vermont USA, London and to Brussels where she exhibited in a group show at the Seven Dials Gallery London.

Belinda moved to Australia which resulted in numerous commissions for hotels, a large scale mural for Jupiters Casino in Brisbane and exhibiting at Graphis Gallery in Woollahra. She soon returned home to New Zealand where she continues to exhibit. Her works can be found in collections around the world.

Her conventional landscapes are set in a background of thick sumptuous colour intended to lure the viewer. Beautifully rendered Belinda captivates the sheer finesse of New Zealand’s unmistakable scenery.